Meat of the Matter 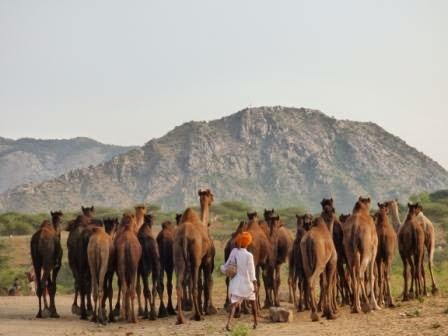 AT LAST NOVEMBER’S CAMEL MELA IN PUSHKAR, the animals didn’t look happy. Some stamped restlessly and brayed in distress, and others sat bored on folded limbs. Ilse Köhler-Rollefson, a global champion of pastoralists’ rights and a Pushkar regular, picked her way through the annual throng of herders and tourists. Dark glasses shielded her blue eyes against the desert sun. “This is the lowest turnout of camels at Pushkar,” she said, in her slight German accent. “I don’t think there are more than 2,500 camels. In previous years, there were 50,000 camels. The draft bill has definitely scared everyone.”

The Rajasthan Camel Bill, pending before the state legislature, proposes a blanket ban on camel slaughter, and on the export of camels from the state. Its provisions are meant to stem a decline of camel numbers in Rajasthan, and follow the recognition of the camel as a state animal last June. But the bill has caused deep disquiet among the Raika, a Hindu community traditionally responsible for most of the camel breeding in Rajasthan, by threatening the last remaining economic incentives for raising the animals.

For centuries, the Raika sold male calves as draught animals to farmers, merchants, and the cavalry regiments of the area’s Rajput chieftains. Females augmented herds and were never sold, and there was a taboo among the community, which is vegetarian, against selling their camels for meat. But as mechanisation reduced demand for draught animals, some Raika quietly started selling camels for slaughter. As the practice continued, herds were decimated. Censuses by the central government show that Rajasthan’s camel population declined from 669,000 to about 422,000 between 1997 and 2007, and then to just above 325,000 in 2012.

Köhler-Rollefson and I walked to a visitors’ stall run by the Lokhit Pashu Palak Sansthan, or LPPS. She works closely with the NGO, founded to support the Raika by a local activist, Hanwant Singh Rathore, in 1996. In 2001, she told me, “Raika leaders, assembled here in Pushkar, called Hanwant and me for a meeting. They said many in their community were selling their female camels for meat. We were shocked.” The leaders wanted a ban on slaughtering females. “We wrote to everybody,” Köhler-Rollefson said, “from the district collector to the chief minister,” but no action was taken.

When the Rajasthan government declared the camel a state animal, Köhler-Rollefson said, the LPPS “thought perhaps now things would change for the better.” But their delight ended after hearing of the Rajasthan Camel Bill. The LPPS insists that the slaughter of male camels be permitted to allow camel breeders a livelihood, while the killing of females be banned to preserve herds. Rathore, who had been busy attending to visitors, sat down next to us. “If there is no earth, where will the seed come from?” he asked, reciting a Marwari saying. “If there are no females, where will the calves come from? There are only 200,000 camels left now. At this rate, soon we will lose them all.”

The Raika’s traditional ways have also been jeopardised by the disappearance of pasture. Many old grazing grounds have been overrun by vilayati babul, an invasive plant known scientifically as Prosopis juliflora. Other pastures have, since the 1970s, been turned into farmland thanks to irrigation schemes. Elsewhere, electric pumps and tube wells allow fields where camels earlier foraged during fallow periods to be tilled year-round. The Raika also no longer have free use of old grazing areas that have come under the control of the forest department, and often have no choice but to violate the department’s restrictions at the risk of fines.

The LPPS makes artisanal products such as camel-milk soap—bars of which were on sale at the stall—but it’s hard to imagine this becoming a mainstay of the Raika economy. Other economic alternatives, such as cooperatives to process and sell camel milk, have been shot down. The economist Bibek Debroy, a member of the NITI Ayog, a new planning body of the central government, wrote in a column in November that it would be too expensive and impractical to collect milk from the Raika since the community is very widely dispersed. He argued in favour of farming camels for meat instead.

Hajiram, an elderly Raika, joined us. Köhler-Rollefson asked him the going price of camels at the fair. His shoulders slumped. “Camels that sold for Rs 20,000 last year are selling for Rs 7,000 and Rs 8,000,” he said. “Meat traders bought the most.”

Published in The Caravan, April 2015