How not to deal with a plagiarism allegation

When the subject expert who's the husband of a writer emails you about instances of identical sentences in your work, take the time to deal with his concerns. This is your chance to de-escalate this. Mistakes happen. Everyone understands that.

Do not accuse him of misleading you. Do not make it seem as if you are doing him a favour by writing about a species he cares about. Do not bring up a silly report you wrote 20 years ago that was riddled with factual inaccuracies and dangerous recommendations such as promoting surma (kohl mixed with snake venom applied to the eye as an antidote to venomous snakebite), snake charmers keeping snakes knotted up to prevent escape, etc. and complain that he was somehow discouraging you when he critiqued it. Nobody, except your friends, owes you such unquestioning loyalty. If you had learned anything from that episode, it is that mistakes happen. He didn’t hold that report against you and instead encouraged you over the years, sending you appreciative notes about your writing. Do not hurl that at his face and say you are confused by his “dichotomy”. In sum, you only piss off the already pissed-off writer who thinks there’s no point in having a conversation with you.

The writer tweets about the identical sentences but doesn’t call it the triggering P word and tags the publisher. Do not piss off the twice-pissed-off writer by then saying this is a “blatant lie”. She has been more considerate to you at this point than you have shown yourself capable.

Do not then speak to her on the phone and ask why she didn’t email first. You had that chance and blew it. Do not then excuse your offensive email by claiming you were in a meeting. Do not then claim you have a record of “each and every email from Rom”. There was only one in which he replied to your 2 questions. As the sender of that email, guess what, he has a record too.

Do not then demand ‘have you read this section, under the binding, among the flowers’,

because frankly at this point the writer is so sick of it she wants to throw the book in the Bay of Bengal. Besides, it is not her job to do the work of looking.

Do not claim the writer was replying to her husband’s emails which confused you. [The cognitive dissonance of this makes the head ache.] That’s silly. 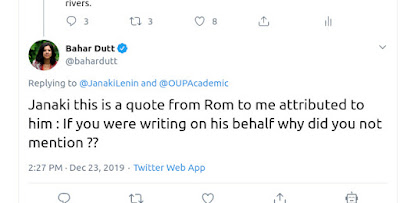 Do not claim the source you lifted sentences from were quotes from her husband. The source has been online for a dozen years. Do not claim you didn’t use quotation marks around these texts because “flows from a quote before”.

Take the first instance of identical sentences, this is how the gharial section begins. 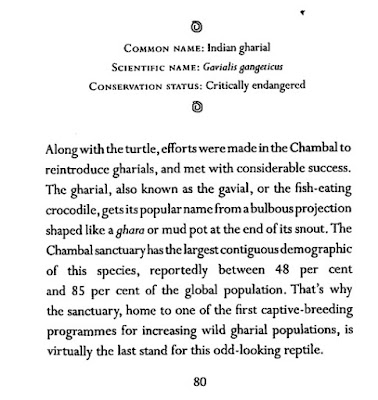 The following paragraph is a lifted text. Then you introduce the husband in the later paragraph. So what is the preceding quote that flows into the copy-pasted section? 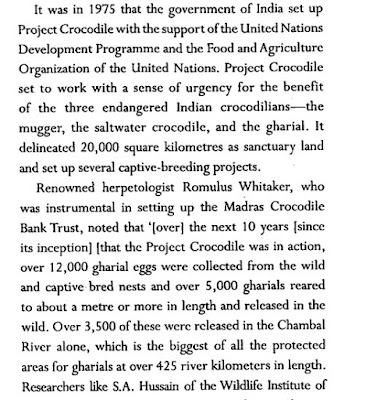 Do not claim there are some great nuances that aren’t apparent, because this is really an open and shut case. 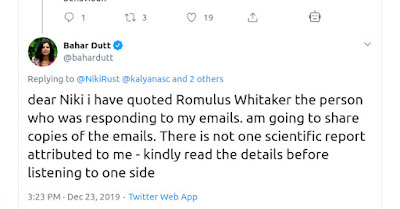 Update: In the next edition, Oxford University Press, the publisher of the book, says it will enclose quoted text within quotes and cite my original article.

Note to the world: If I ever make these mistakes, please boink me on the head with this post.
Posted by Janaki Lenin at 9:25 AM No comments: