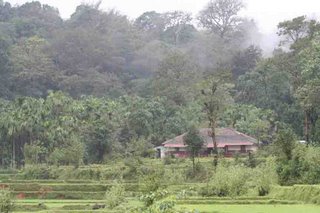 If you are a researcher in the Western Ghats who is tired of staying in Inspection Bungalows or Forest rest houses under the threat of eviction anytime and your experience of life in the jungle is the same as mine, read on. My memory of working in the rainforests of the Western Ghats goes like this – wet tent, damp firewood, leeches galore, mouldy clothes, an unending series of dinners of semolina, instant noodles, rice and dhal and a desperate craving for pizza. Of course, there is the bright side of camping – of time spent watching a giant millipede make its way across the leaf litter, glow-worms that light up the night like earth bound stars, lizards that seem like butterflies as they glide from tree to tree, waking to the call of the Malabar Whistling Thrush. For a late blooming naturalist like me whose idea of comfort was four walls and a bed, the dreariness of camping (which hits a low at nightfall) outweighed the joyfulness (during the day) and I suspect that’s the reason why so many field researchers drop by the wayside in India. Rom Whitaker decided that if the researchers can’t be brought to the mountains, then the mountains will have to meet them half-way. That was how the idea of the field station began more than a year ago.

But why in Agumbe, you may well ask? Agumbe holds a special place in Rom’s affection as he caught his first king cobra there back in 1971. He has since visited the place as often as he can. When the rest of the country’s towns and cities are undergoing a vast transformation, Agumbe has remained the same for the last 35 years and that appealed to Rom. Ok, there are a couple of tea stalls extra but that is the only visible change. The people are still warm and effusive, bringing you hot steaming cups of heavenly kashayam (a non-caffeinated medicinal drink) to ward off the rainy chills. It also helps that the people here have a reverence for king cobras, missing elsewhere. In one case a king cobra strayed into a bathroom and the people of the household lived with it for three days before seeking our help. They consider it a god who has graced their house and they were very particular that we didn’t harm the snake (or anger it) in any way. “That’s half the battle won,” Rom said in admiration. After living all his life in places where it was hard to convince local people to let snakes live, it was a welcome sign of relief that he didn’t have to do any proselytizing here. Rom’s dream was also to have a station where king cobras casually cross the backyard to drink from the spring and he found it in Agumbe.

Agumbe is only a non-glamorous Reserve Forest but adjacent to one of the last surviving lowland rainforests, Someshwara Wildlife Sanctuary and the more famous Kudremukh National Park. A couple of kilometers from the town into the Reserve Forest, Rom came across an eight-acre agricultural land. When we heard that the family was looking for a buyer we began scrounging for money. We didn’t have any but Rom’s mum, Doris Norden, said she had some money she would like to give him for the cause. Hectic parleying began with the owners but before the deal could be concluded Doris died. Exactly a year later, Rom bought that piece of land with money his mother had willed him and finally Rom was the proud owner of land in prime king cobra territory.

In April 2005, Rom won the Whitley Award, which would help set up cottages, buy basic scientific equipment, and a vehicle. The land is not connected to the electric grid and Rom decided he wanted a place that was a model of sustainability – a hybrid of solar and hydel electricity would power the station. It’s easier said than done unless you have expert help which we found in Jos van den Akker of Auroville. Jos found ways to cut costs and put us in touch with hydel power expert, Ramasubramanian.

We needed help with building designs and blueprints so Srikumar Menon, a faculty member of the Manipal Institute of Technology volunteered his help. A team of his architectural students have come up with a design for the cottages and during the first week of December 2005, construction will begin. It finally seemed likely that the rainforest research station would transcend from a dream to reality.

Naturenet Café is the name of the local village information centre that Rom dreams of setting up in tandem with the field station. With high speed broadband and intranet connectivity, local farmers can find the best market prices for their produce, school students can get trained in the new technology, information on sustainable ways of farming, land use, ecology, wildlife will be made available here. Passing tourists can purchase locally made handicrafts and information on the rainforest, not to mention hot cups of kashayam, king cobra T-shirts and merchandise. For me, it’s just the place to do emails without having to hike up to Thirthahalli or down to Manipal.

It has been a frustrating few months – we had the money and the designs but the monsoon was in full swing. At the time of writing Agumbe had already received more than 7000 mm of rain, reportedly next only to Cherrapunji. As we sat in the courtyard of the old mud farmhouse and watched the rain swirl round and round, a flock of woolly necked storks walked in and out of the mist. Birders visiting the station made a casual list of 200 species of birds, barking deer visit the land in plain sight of the house, a troop of common langurs are shy neighbours and of course there are the king cobras.

P. Gowri Shankar is the intrepid Education Officer who lives on site. In between visiting local schools and colleges on environment education campaigns, he has caught 18 king cobras from people’s houses, gardens, wells and plantations. Early this year he became the first researcher to ever witness a wild king cobra making her nest. Rom scurried around for a video camera to send Gowri but by that time nest building was complete. The mother abandoned her nest after a few days because of local disturbance nearby – a land owner decided to set fire to a massive trunk of tree which smoldered for days. Smoke is anathema to snakes and it effectively drove the mother snake away. Similarly temperatures and humidity of two other nests (both also abandoned by the mother snake) on private estates were monitored throughout the entire period of incubation and the results of the first such studies of wild nests are beginning to emerge. In all instances, Rom put his hand deep into the nest to put in data loggers and reported that the packed mound of vegetation kept the eggs dry during the torrential rains. The output from the data logger however, suggests that the pile of leaf litter does not raise the temperature of the nest chamber. These wild nests took a lot longer than captive eggs to hatch because of the low temperatures they incubated in but they produced very healthy, sturdy babies. Surprising too was the hatching rate of 99% - we thought we were doing well with 60% in captivity. The natural incubator the mother king cobra makes from leaves somehow keeps the eggs healthy while no man-made incubator seems capable of maintaining the high humidity without a fungal attack.

One observant villager mentioned that he had seen the mother king cobra bask in the morning light and then go into her nest. Perhaps she was bringing additional heat into a cool nest to aid incubation? Maybe there was survival merit in speeding up incubation so the eggs remained vulnerable only for a short time. Until we find a nest with a guarding female, this will remain mere speculation. And therein lies the conundrum – female king cobras in the Western Ghats seem to be very sensitive to disturbance. They seem to flee at the first smell of danger and yet we have heard of occasional persistent females who tried to return to their nests for days despite being repeatedly chased away by people. It’s a matter of time before we come upon a determined nest guarding king cobra and until then the questions will remain.

In April we visited a nest abandoned by the mother king cobra who had been making a nest in the same place for the last three years, according to the villagers. If this is true (and you can be sure we will be there next nesting season) this will be the first recorded evidence of king cobra nest-site fidelity in India. Every single nest site we have seen in the last two years has been GPS marked (as was every capture and relocation) and in the following years, it would be interesting to see if nest-site fidelity is the norm.

One of the questions also remaining to be answered is – why do king cobras gravitate towards habitation. For years, the standard reply was because rats live with people; rat snakes come to eat rats and king cobras follow to eat the rat snakes. But there is a possibility that king cobras living close to villages may seek coolness during the hot dry months and warmth in the cold rainy months. We make convenient cave-like dwellings (we call houses) that provide the optimum temperature for a snake when the weather is harsh.

We hope the Agumbe Rainforest Research Station will function in just the same way for researchers – a cool place to hang out in the middle of the rainforest.
Posted by Janaki Lenin at 5:24 PM 23 comments: