FROM THE JAWS OF EXTINCTION… 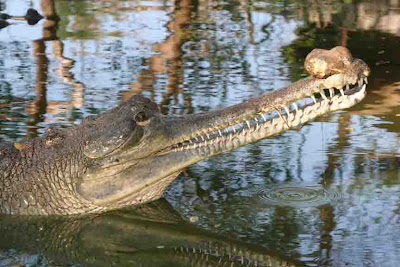 With its fantastically long, tooth-filled snout, the gharial takes the crocodile design to the extreme. Sadly, such weaponry has been useless in saving the species from a dreadful decline and its last hope rests with ROMULUS WHITAKER and his colleagues.

THE SUN BLAZED overhead. It was midday and we had been walking for hours. I wanted to believe that the wisp of blue in the distance was the River Padma – our destination – but I worried it was a mirage. The river is the official boundary between India and Bangladesh, and has changed its course so many times I feared it might have vanished altogether.

Finally, a ribbon of cobalt swam into view. We reached the brow of the high bank, knees buckling with exhaustion, when, in the water below us, we saw a crocodile with an unfeasibly long snout. Was it a gharial or just another illusion?

The reptile’s sleek body glistened in the sun. She seemed unafraid of us, and we guessed she was guarding eggs buried in the sandbank. Instantly revived, we dug until we found the nest, watched suspiciously by its owner. We were hoping to rear her young safely in captivity and then release them, but she didn’t know that. Still, she didn’t attack us.

GOING TO POT That was in the mid-1980s. We didn’t know it then, but this may have been the last time gharials nested in Bangladesh – a symptom of the species’ decline across its entire Asian range. The problem was that no one knew enough about this unusual croc to be able to help it. This is what prompted me to work as much as I could in gharial country – India, Bangladesh and Nepal.

What sets the gharial apart from all other crocodilians is its incredibly long snout, which it wields like chopsticks. These slim jaws, lined with sharp teeth, are ideal for catching fish. But they have another function. When a male reaches adolescence, at about age 12, a wart-like appendage begins growing on the tip of his snout. This is the ghara (Hindi for ‘pot’, which it resembles), and it completely covers and presses down on the nostrils. When the male breathes out forcefully, it produces a flatulent noise that carries across the water. The politest term I can come up with for this noise is ‘buzz-snort’. It serves two purposes – to attract females and warn off rivals.

We heard the buzz-snort in action near Rajghat on the Chambal River in northern India. We saw a big male gharial patrolling and heard his underwater territorial jaw-clap – the gharial is the only croc to advertise its presence in this way under water (some biologists think this could be a method of stunning prey as well as marking territory). It was an early winter morning, and when he surfaced and buzz-snorted, we could see the vapour leave his nostrils. Though it was winter, when crocs bask on the sandbanks to warm up, this adult male spent most of his time in the water, attending to his harem of females and alert to any male who might try to usurp his position.

Fights between male gharials involve terrific displays of prowess. The territory-holder surges forward, churning the water into a froth with his tail. If the intruder remains unintimidated, the two males engage in combat. Their slender snouts clash like swords in the air, though they seem too fragile for such violent action – indeed, you can often hear the crack of a tooth splintering or bone hitting bone. Eventually, one gharial will prevail and the other retreat.

MUM’S THE WORD The testosterone that fuels these fights between males ebbs after mating. Then the females go to war, battling over the best nest sites. Their conflicts are less brutal than the males’, though the same rule applies – the larger individual invariably wins. Once the territory squabbles are over, a mother gharial makes a 40-50cm-deep nest hole with her hind feet, into which she lays about 50 large eggs. She then covers the nest, tossing sand over the area to hide her tracks from predators such as hyenas, jackals and mongooses, before returning to the river to keep watch from a distance.

Many crocodilians are attentive parents, but little was known about how gharials care for their young until I observed our captive-breeding population. One day I noticed a mother begin to dig up her nest. As I got closer, I could hear her babies calling from beneath the sand, just as other young crocs do. It can take mother crocs hours to assist their babies to the water, as they cannot see exactly where the youngsters are. They often mistake rocks, egg shells, clods of dirt, even baby turtles for their own young, and will tenderly carry them to the river.

This female dug with her front feet until she flipped out a baby, which landed by her hind feet. She then ‘back-heeled’ it through the air into the water. She excavated the rest of the nest without jettisoning any more youngsters, and then turned around and slid into the river. Her 36 babies followed, rather like ducklings.

Alerted by all the activity, the male lurked nearby. When he swam close, the babies climbed onto his head, transforming him from an aggressive fighter into a devoted parent. Both adults then guarded the youngsters. In the wild, their behaviour is no doubt similar. It’s likely that family groups are only split up when monsoon rains wash the juveniles away.

RIVER DEEP
Up to 100 years ago, the gharial’s buzz-snort resonated along the deep rivers of the northern Indian subcontinent. Not for the gharial the still waters of ponds or lakes where other crocs thrive: this is a hardcore river-dweller that eats only fish. Unfortunately, this narrow choice of habitat and diet has been the gharial’s downfall. Its rivers are being dammed, which isolates populations. After the last Ice Age, the gharial staked out about 20,000km2 of rivers, spanning Pakistan to Burma. Today, its domain is a mere 200km2 and dwindling.

To counter this decline – and that of other Indian crocodilians – Project Crocodile was set up in 1974 by the Indian Government with help from the UN. Throughout the 1970s and 1980s, we carried out surveys, behavioural studies and captive breeding. We reared thousands of youngsters and released them in protected areas. Sadly, few of these pioneers survived for long – but we didn’t know why.

For example, the beautiful Satkosia Gorge in Orissa appears to have everything a gharial could want – fish, sandbanks, protection – and threats such as bamboo-rafting and net-fishing have been eliminated. Yet only two of the 700 gharials released here in the past three decades have survived. When I visited the Gorge during the monsoon in mid-July, I saw how small streams had become torrents. The river roared up to nine metres above its dry-season mark, eroding the banks and uprooting trees. The released gharials were obviously being flushed downriver, out of the protected area and even into the sea. One was seen on a beach, others in mangroves and ponds. Those that took refuge in tributaries were caught in fishing nets.

Fishing is a massive problem. In supposedly protected areas, we saw several gharials whose snouts had got tangled in nylon fishing nets. It was clear that, despite the rules, gill nets were being set at night, entangling gharials that tried to swim through them or attempted to eat the netted fish. The crocs didn’t drown, but they were left unable to open their jaws and thus in danger of starving to death. In other places, dam construction disturbed nesting gharials and local people raided the nests for eggs to eat.

Clearly, though the gharial’s slide towards extinction had been slowed, our 30-year strategy of captive-breeding has not been enough. The species faces an uncertain future and its survival is closely linked with the needs of the humans dependent on the rivers. Our campaign (see right) is part of a much larger initiative to ensure the survival of these rivers. The threats – from development, pollution and climate change – increase day by day, but we are guardedly optimistic that people are at last ready to do what it takes to save the gharial, the ultimate icon of a healthy river.
Posted by Janaki Lenin at 2:36 PM 1 comment: