Trails in the Misty Mountains 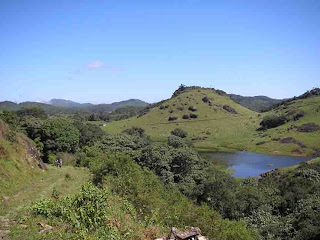 It is said that Somerset Maugham had a transcendental experience at Neterikkal Reservoir in Kalakkad-Mundanthurai Tiger Reserve. I had a more worldly expectation; I went armed with a long wish list of animals, birds and insects. As we climbed up the road through Bombay Burmah Trading Corporation’s (BBTC) Manjolai tea estate, RC, our Kani guide, pointed to a distant grassy platform as our destination, Kudiravetti.

The tops of crotons and rose bushes that border the front yard of the rest house had been cropped by sambhar. Below us spread the Manimuthar and Karaiyar reservoirs, and the towns of the plains. The Kudiravetti grassland had few trees and a strong wind made hovering in one spot difficult for a black-shouldered kite. Despite its remote location, the rest house had electricity and running water. Hotel Manikanda Vilas in Oothu, just 15 minutes drive away, was the feeding station.

That night as we drove around the tea estate our light beams picked up the ‘eye shine’ of gaur, and sambhar grazing on the succulent grass. Although the chilly mountain air kept us awake and alert, we were startled by the brilliant eye shine of a large leopard stalking sambhar. Not a bad start. Despite our excitement and curiosity, we drove on so as not to interrupt the hunt or disadvantage the predator. The rest of the night didn't show up anything spectacular.

The next early morning we set off to visit Muthukulivayal, a two hour drive away. As the sun warmed up, scimitar babblers and Eurasian blackbirds got busy and it was tempting to dawdle along the way. We had to hurry to beat the mist. Crossing the various bridges around the Upper Kodayar reservoir revealed extensive vistas of forest as far as the eye could see. A herd of 17 gaur (check mark on my list) crashed through the forest as we approached. We gave them a five minute head start before venturing after them. At the top of a grassy knoll, we watched the herd disappear behind the hill. A huge black bull, so muscle-bound he could barely walk, brought up the rear.

We scanned the rocky outcrops for Nilgiri tahr but there was no sign of them. Unwilling to return just yet, I glassed the rocks again and came to rest on three immobile rocks balanced on a large rocky slope. I excitedly gestured everyone over and pointed to the tahr. Maybe I was losing it entirely; they were rocks after all. Just then, the three basking rocks peeled away from the slope. Then others stood up on nearby rocks and the final tally was eight tahr (check). All of them made their way sedately across the grass, up the slope and over the crest. Elated at having seen the tahr and gaur, we gorged on a celebratory breakfast of idlis and coconut chutney. My trip was made and everything else could only be icing.

Our host, Mr P, announced that our booking did not allow us to stay more than two nights and we’d have to vacate the next day. This could be bad. We considered the alternatives, none of them simple or bother-free. Eventually we decided we’d ask Mr P to re-check and sure enough, we were alright. There was no need to panic. I began to suspect that Mr P reveled in crises.

We returned to Muthukulivayal the next evening hoping to get a good shot of the gaur. We did indeed come across three herds but they were very skittish. The safe distance was several hundred metres, no good for a decent picture. One lone bull grazed in the dull light and Gireesh waited for a silhouette against the sky shot. When he did crest the hill, Gireesh whispered, “He looks like a rabbit!” Later that night, we came upon another lone gaur bull grazing in the tea estate that ignored us completely. He grazed with single-minded concentration. We cleared our throats to get his attention; he wasn’t falling for that trick. Finally when Ravi turned off the engine, the gaur looked up long enough in the middle of a bite. Instead of a majestic stately creature, it looked like he was having a ‘duh’ moment.

After sunset, we spotted a leopard (check) near the Upper Kodayar dam who disappeared into the undergrowth like a ghost. On the other side, a couple of gaur with two tiny calves stood silhouetted on a short bluff overlooking the road. Although we were close by, they didn’t run away. RC surmised that the leopard may be stalking the calves and they were playing it safe by being out in the open, by the road. We didn’t hang around to learn the outcome of this unraveling event.

On our return, Mr P had another crisis ready for us: one of the bridges that permits access to Kudiravetti was to be demolished the next day and we would have to leave by 6 am. It turned out that the demolition was slated for 4 pm only; by then we would have left. So yet another crisis fizzled out with no major intervention. We figured he had earned the nickname of Mr Crisis Queen.
Another morning, we set off for Kakachi to trek up the Sengeltheri path. We parked the car near the Forest Department bunker called Fern House and explored the forest patch along the road. The enormously winged tree nymph butterflies (check) flapped and soared lazily through the trees. Large velvety brown, aromatic nutmeg fruits lay by the roadside, apparently eaten by lion-tailed macaques and other creatures. Tree ferns grew luxuriantly along the streambanks.

While birdwatching along the road, Ravi amazed us by spotting a large-scaled green pit viper on a branch about 25 feet off the ground. Try as I may, I just could not see it among the jumble of leaves, and branches. Since pit vipers are known to sit in the same spot for weeks, sometimes even months, we returned that night to see if we could eyeshine the snake. No luck, their pupils are too small. The next day I was finally able to see the snake stretched along a twig, a couple of inches to the right of where he had been before. Subsequently we spotted it regularly on our trips up and down that road until we left a couple of days later. This is a real ‘sit and wait’ predator!

With a pair of mountain imperial pigeons quietly honking at each other, we set off up the path behind Fern House. We were armoured in our choice of anti-leech weaponry: Ravi liberally dusted his socks and shoes with snuff, RC smeared Clinic Plus shampoo around his chappals, Gireesh’s leech socks were sprayed with insecticide and powdered with snuff while my leech socks were doused with insecticide. The smell of RC’s sweetly perfumed foot gear wafted up as I followed him up a steep slope.

It was impossible to tell what species of massive trees lined our path; they were so tall that their leaves were way up in the canopy. Helpfully, researchers had labeled some trees along the path and I saw the most humongous Calophyllum of my life. It was a steep uphill climb that expanded the capacity of our lungs to the limit. The spiny rinds of cullenia lay strewn along the path; the aril, or seed lining of this fruit is a favourite food of lion-tailed macaques. As the sun rose, beams of light filtered through the tree trunks and lit the forest floor. Distant calls of Nilgiri langurs and the drumming of the white-bellied woodpecker resonated through the forest. At a junction of two paths, we hear a constant, rapid, loud clicking sound. RC said “elephant stomach rumbling or the whiskers of a tiger vibrating.” He turned circumspectly onto the Sengeltheri path to investigate while I walked straight down to a large swamp. I was pretty sure they were frog calls but local tribal intelligence maintained that it was the tremendously vibrating whiskers of a tiger.

Seeing us, a giant Malabar squirrel set up a din that sounded like one of those light flashing toy guns. We had breakfast on the rocks while I mused over the enigma of the skid tracks all around us. Gaur apparently have no sense of balance here; even on perfectly level ground they appeared to slip and slide. Beyond the rocks, a path split off which RC said was made by elephants. He reluctantly led the way on my suggestion. After a while he refused to continue as the terrain was flat and should an elephant charge there was no way to escape. Back on the main path, courting butterflies chased each other in the sun beams. A lot of the time in the rainforest is spent with our heads thrown back and with binoculars glued to our eyes. To maintain this posture, one needs a neck of cast iron and arms of steel.

We wondered what Mr Crisis Queen had waiting for us at base camp. It wasn’t long in coming. Twenty people were expected to visit that night. There were only 3 rooms of which we had 2. None of the rooms were large enough for even 3 people to share. We anticipated unpleasant drunken noisiness. Only five people came up while the others stayed elsewhere. What did I tell you?

Next morning as we reluctantly left the forest behind us, I realized that my faculties were alert to movements, sounds, colours, and textures; I was no more a sluggish domestic buffalo. It may not have been an out of body experience, but the energy the forest gave me and the sharpening of the senses allowed my mind and body to encompass the world.