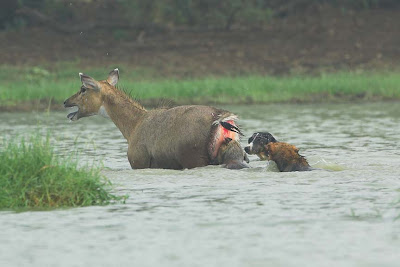 An earlier draft was published as Stray Scare in Sunday Express

Four-year old Nina bent down to pat the little stray puppy that was curled up asleep on the pavement. Before anyone could prevent it, the puppy had ripped her lip. The traumatized girl was quickly whisked away to the doctor for stitches and anti-rabies shots. In this incident, both the dog and the little girl are victims of our poor management of stray dogs. The puppy was an insecure, poorly fed, abused animal at the mercy of passing humans. Like millions of others, it had to fight a daily battle to stay alive, dodging traffic, finding shelter against the harsh summer sun and rain. No wonder he had misinterpreted Nina’s approach with suspicion and had launched into an offensive. This is not an isolated incident but typifies a growing problem that we have to resolve now for the sake of dogs and people.

The first point we simply cannot ignore when we are talking about stray dogs is that India tops the world in rabies deaths. Rabies is 100% fatal, just like AIDS and stray dogs are the Number One transmitters of the disease in India. It is hard to get any figures on human rabies cases as the Ministry of Health does not require hospitals to report cases. The best estimate available is the WHO’s National Multi-centric Rabies Survey of 2003, which puts the figure at 20,000 rabies deaths a year in India (tragically, half of them are small children). Doctors candidly state that the infected person is treated as an outpatient, given a heavy course of tranquilizers for a week and sent home to die as peacefully as can be hoped. According to the WHO’s 2003 report, there are an estimated 22 million dogs in India of which 14 million are strays.

In India Animal Birth Control (ABC) is presently the sole legal method of stray dog control in India. Ironically, Rule 7.9 states, “Female dogs found to be pregnant shall not undergo abortion (irrespective of stage of pregnancy) and sterilization and should be released till they have litter (sic).” The very rules that are meant to control the stray dog population mandate that stray pregnant female dogs should be allowed to give birth on the streets! Hardly ethical and humane!

The abundance of garbage coupled with the dogs’ innate fecundity are not the only reasons for the burgeoning stray dog population (as it is made out to be). Irresponsible dog owners are largely to blame – they abandon unwanted puppies and dogs on the streets. Even well to do families may dump their pets when they move to another city, or to an apartment complex with a no-pet policy. When there is no protocol or effective law in place to check this practice, we can continue to sterilize strays for the next 50 years and still not reach the intended target. It’s like trying to mop water from the floor while the tap remains open. Besides, ABC does not prevent dogs from attacking people nor is a sustainable rabies control protocol in place for the sterilized animals.

To further complicate matters there are numerous voluntary organizations which actively feed stray dogs. For instance, in 2001 the Ministry of Culture disbursed Rs. 10 crores to such organizations on Mahavir Jayanthi for the purpose of feeding stray animals. So even if we clean up our streets and make garbage inaccessible to stray animals, there is enough food given by sympathetic souls to sustain a huge population of strays. All the organizations working towards reducing the stray dog population should work out an integrated policy for the problem.

The WHO recommends that for ABC to be effective, at least 70% of the total population has to be targeted within 6 months. However, the reality falls far short of these recommendations.

According to the estimates released by animal welfare organizations, New Delhi alone has about 200,000 stray dogs. Contrary to WHO recommendations, 20,000 dogs is the admitted annual capacity of the 6 to 8 animal welfare organizations responsible for the implementation of Animal Birth Control in Delhi. That means only 5% of the total stray dog population is sterilized over a period of 6 months, 65% less than recommended. Although 20,000 dogs are sterilized a year, it still leaves the rest of the population (180,000) free to breed. Let's assume that only half of this remaining population (90,000) is female and that only half this number (45,000) is able to breed successfully (not juvenile, too old, or unhealthy) and only two pups survive per litter. That results in 90,000 dogs added again to the population. Although dogs reproduce twice a year, we'll keep the estimate conservative. Sterilizing 20,000 dogs still results in the population growing by nearly four times in one year! This estimate does not include the thousands of abandoned un-neutered pets that are added to the stray dog population each year. (According to the International Fund for Animal Welfare one female dog and her offspring can produce 67,000 puppies in 6 years!).

Although the ABC programme is funded by taxpayers it is largely performed on a voluntary basis by NGOs with limited (urban) reach. Unless the infrastructure to deal with tens of millions of dogs at one go is in place, the good intentions of the many dedicated NGOs will remain futile. Dogs are capable of breeding faster than any organization can sterilize them and the bottom line is, they are the biggest reservoirs of the rabies virus.

Where is the Plan?

Currently, there is no strategic Action Plan that clearly evaluates how many years it will take at the rate of how many sterilizations per year to reach a target of zero stray dogs. The stray dog population control functions on an ad hoc basis and any claims of its effectiveness is challenged by the lack of planning, infrastructure, funds and a scientific policy.

India is disturbingly the only country in the world to follow a policy of returning sterilized stray animals to their respective localities. In a scene reminiscent of the Roman gladiator days, we are daily witnesses to these strays dodging traffic, getting run over by vehicles, fighting with each other, and suffering from diseases like parvo, enteritis, distemper, cancer and mange. According to the WHO’s 2003 data, an average of 17 million people get bitten by dogs every year in India of which 76% (about 12 million) are caused by strays. The Government of India’s annual medical cost for treating these bites runs close to Rs. 1.5 billion, while poor people form nearly 88% of the rabies mortality figure says the same report.

Is it surprising then that in many areas, the public view stray dogs as a nuisance and vans returning the strays after sterilization are stoned and chased away. Such stray dogs are released in the outskirts of towns and villages, and sometimes in forests to fend for themselves.

Are Sanctuaries for Wildlife?:

Dogs (like cats) are natural born predators and it is very difficult to teach them otherwise. Stray dogs are incredibly damaging to wildlife killing untold numbers of monitor lizards, birds, snakes, and other wild creatures. No discerning environmentalist would want to trade our dwindling wildlife for a world of free-ranging feral domestic animals. On the remote beaches of the Andaman and Nicobar Islands, 90% of the highly endangered leatherback sea turtle nests are destroyed by stray dogs; they are actually helping to push this largest of all sea turtles to the brink of extinction. Closer to home, packs of stray dogs regularly bring down black buck and deer inside Guindy National Park in Chennai and at the Vandalur Zoo. In Mumbai, the leopards of Sanjay Gandhi National Park proliferate on an unnatural diet of stray dogs, resulting in dozens of human and leopard deaths. Stalking and hunting stray dogs means the big cat is also watching human behaviour at close quarters. In several recently documented cases in Junnar, Maharashtra, leopards killed humans while chasing dogs.

In parts of India stray dogs transmit rabies to wolves and jackals, creating a wildlife conflict situation that results in scores of wild wolves and jackals being killed by panicky humans. In Aurangabad district, a rabid wolf bit 12 people in a single day of whom 3 died despite receiving anti-rabies treatment. It is irresponsible to leave unmanaged populations of potentially dangerous predators such as domestic dogs to run wild in our streets and forests. India needs a large-scale publicity campaign to educate people on the necessity of sterilizing their pets and the State has to provide the infrastructure for cheaply affordable sterilizations. Unless this is done as a government initiative, stray dog population control has little chance of being successful. Rabies control cannot be effective if run as a voluntary charity as it is right now. It needs an effective campaign similar to the drive that eliminated that other scourge, small pox, in this country and requires the same kind of publicity and mobilization that goes into eradicating polio.

When responsibly cared for, dogs are truly man’s best friends, but the issue of stray dogs has mushroomed into India’s worst public health problem involving animals. What we need is a meeting of minds to hammer out a solution to a problem that is rampant in both urban and village areas. Animal welfare doesn’t stop with feeding animals; it includes taking care of them and ensuring the animals don’t suffer from preventable diseases such as rabies. We have created a problem that has gotten out of control and now we need pragmatic, effective, humane solutions based on the best scientific advice, to prevent incidents such as the 1200 dogs poisoned in Kashmir recently (reported on 28th November 2006) or the 6 year old girl who was killed by 15 stray dogs at 7.30 am on 5th January 2007 in Bangalore or the 55 year old man who was killed and eaten by strays late evening on the 4th January 2007 in Chandigarh.